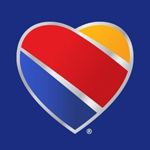 Reputation for great customer service and a great place to work

Has a very loyal employee base

A leading airline in employee and customer relations.

Southwest Airlines is the largest carrier of US domestic passengers and has enjoyed almost half a century of straight profitable years amid the airline industry's ups and downs. The airline employs a single aircraft type—the Boeing 737—and offers first-come, first-served seating. Sticking with what has worked, the company has expanded its low-cost, no-frills, and no-reserved-seats approach to air travel throughout North America, Mexico, and the Caribbean to serve more than 100 destinations. Southwest's fleet numbers around 745 Boeing 737s.

Southwest offers point-to-point service (rather than a hub-and-spoke system, which concentrates on a limited number of central hub cities), allowing the airline to offer more direct, nonstop flights. More than three-quarters of the company's customers fly nonstop between about 720 city pairs. Schedules include 20 weekday flights between Dallas and Houston and around 15 weekday flights between cities such as Burbank and Oakland, CA; San Diego and San Jose, CA; and Los Angeles, CA and Las Vegas, NE. It also offers near-international service to about 15 destinations as well as freight services. In 2019, the company hopes to begin service to Hawaii.

The company has three major categories of fares: Wanna Get Away, Anytime, and Business Select. Fare prices vary depending on the refund policy and reward points earned on its Rapid Rewards loyalty program. All flights include two free checked bags, complimentary soft drinks and snacks, and free movies and TV on WiFi-enabled aircraft. And unlike most of its competitors, Southwest does not charge fees for changes to flight reservations.

Headquartered in Dallas, TX, Southwest serves more than 100 destinations in some 40 US states and ten near-international countries, including Mexico, Jamaica, Dominican Republic, Costa Rica and Cuba.

Southwest leases or pays usage fees for terminal passenger services at each of the airports it serves. It leases land and structures for its aircraft maintenance centers located at Dallas Love Field, Houston Hobby, Phoenix Sky Harbor, Chicago Midway, Hartsfield-Jackson Atlanta International, and Orlando International airports. It is also committed to paying for various airport improvement projects for new facilities and the rebuilding or modernization of existing facilities.

The company owns a main headquarters building in Dallas as well as two additional headquarters buildings—an energy-efficient, modern building called TOPS, which houses operational and training functions; and the Wings Complex, which consists of a Leadership Education and Aircrew Development (LEAD) Center as well as simulator, classrooms, and office facilities.

Expenses for advertising and promotions have decreased recently with $212 million spent for marketing in fiscal 2019 versus $215 million in 2018 and $224 million in 2017.

Southwest has grown steadily over the last several years. Its revenue grew 2% from $22 billion in 2018 to $22.4 billion in 2019. The growth in 2019 was driven by a 2% bump in passenger revenue fueled by increased capacity and strong demand.

Net income dropped 7% to $2.3 billion in 2019 compared with $2.4 billion in 2018 but was in line with previous levels. The decrease was primarily due to the $249 million increase in the company's operating expense.

Cash at the end of fiscal 2019 was $2.5 billion, an increase of $694 million from the prior year. Cash from operations contributed $4.0 billion to the coffers, while investing activities used $303 million, mainly for capital expenditures related to ongoing technology projects, airport and other facility construction projects, and progress payments related to new aircraft to be delivered to the company. Financing activities used another $3 billion for dividends to stockholders and the company's stock repurchase program.

The company's low-cost strategy includes, among other elements, the use of an aircraft type, the Boeing 737, the company's operationally efficient point-to-point route structure, and it highly productive employees. The Company's focus on controlling costs also includes a continued commitment to pursuing, implementing, and enhancing initiatives to reduce fuel consumption and improve fuel efficiency. Although Fuel and oil expense for 2019 decreased compared with 2018, primarily due to lower market jet fuel prices, it nonetheless remained the Company's second largest operating cost for 2019.

These conveniently located airports are typically less congested than other airlines' hub airports, which has contributed to Southwest's ability to achieve high asset utilization because aircraft can be scheduled to minimize the amount of time they are on the ground. This, in turn, has reduced the number of aircraft and gate facilities that would otherwise be required and allows for high Employee productivity (lower headcount per aircraft).

Texas businessman Rollin King and lawyer Herb Kelleher founded Air Southwest in 1967 as an intrastate airline linking Dallas, Houston, and San Antonio. In 1971, the company, renamed Southwest Airlines, made its first scheduled flight. By 1979, Southwest was flying between eleven Texas cities; it added its first out-of-state destination from Houston to New Orleans that year. It later expanded to Oklahoma, Kansas, Arizona, Nevada, and California in 1980.

In 2014, Southwest first started offering international service outside the US, beginning with Aruba, Jamaica, and the Bahamas. Its route map now includes over one hundred cities and destinations.