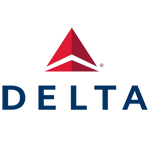 Carries more passengers worldwide than any other airline and employs more than 80,000 people

Recent layoffs due to previous bankruptcy and the recession

Despite recent financial issues, Delta is now financially viable and  carries more passengers each year than any other airline.

Delta Air Lines is one of the world's largest airlines by traffic. Through its regional carriers, the company serves about 300 destinations in about 50 countries, and it operates a mainline fleet of 1,000-plus aircraft, as well as maintenance, repair, and overhaul (MRO) and cargo operations. The airline serves more than 200 million customers each year and offers more than 15,000 daily flights. Delta is a founding member of the SkyTeam marketing and code-sharing alliance (airlines extend their networks by selling tickets on flights), which includes carriers Air France, KLM, and Virgin Atlantic. Customers from the US account for approximately 70% of sales.

Delta divides its operations into two chief segments: airline and refinery. The airline segment, which accounts for 90% of Delta's sales, provides scheduled air transportation for passengers and cargo throughout the US and around the world and other ancillary airline services, including maintenance and repair services for third parties.

By product type, economy/coach tickets accounts for more than 45% of total revenue, while business cabin and premium tickets generate about 30%. Loyalty travel awards, travel-related services, cargo, and other services accounts the remainder.

Delta directly owns an oil refinery in Pennsylvania, operated by subsidiary Monroe Energy. Monroe, which supplies a large chunk of Delta's jet fuel, is loss-making and Delta execs are having a hard time finding a willing buyer.

The revenue growth of Delta for a five-year period starting in 2015 showed an upward trend, except in 2016 when it dipped 3%. Net income followed the same trend with a 7% dip in 2016.

In 2019, revenue grew by 6% to $47 billion compared to $44 billion in 2018. Growth was driven by increase in ticket revenues for both main cabin and business cabin and premium products.

Delta's net income grew 21% to $4.8 billion from $3.9 billion in 2018. The increase in 2019 resulted from a $2.6 billion increase in revenue and lower fuel expense on an 8% decrease in the market price per gallon of fuel and improved fuel efficiency.

An important part of the Company strategy to expand its global network has been to make significant investments in airlines in other parts of the world and expand its commercial relationships with these carriers, including through joint ventures. It expects to continue exploring ways to expand its relationships with other carriers as part of its global business strategy. Delta's alliance with SkyTeam extends the airline's reach to more than 900 destinations in over 140 countries around the globe. The company gets a boost in global coverage with airlines around the world coming aboard the SkyTeam alliance. Delta has five joint ventures with foreign carriers.

To boost its position in the important region of China, Delta acquired a 3% stake in China Eastern, one of the leading airlines in China. The move allows Delta and China Eastern to compete more effectively on routes between the US and China and provided more travel options for customers in both countries.

Looking to Europe, Delta has joint ventures with Air France and KLM, and plans to build its presence in its strategically advantaged hubs in Paris and Amsterdam, while de-emphasizing higher Europe point-of-sale markets. It also holds a 49% equity investment in Virgin Atlantic, which improved its presence in London, one of Delta's largest revenue markets from the US.

Targeting the Asia/Pacific region for growth, in 2018 Delta and Korean Air formed a joint venture, increasing air traffic between the United States and certain countries in Asia.

Delta also has joint venture with Virgin Australia, serving traffic between U.S. and Australia/New Zealand; and Mexican airline Aeroméxico, which includes a joint MRO operation in Queretaro (in addition to trans-border flights between the US and Mexico).