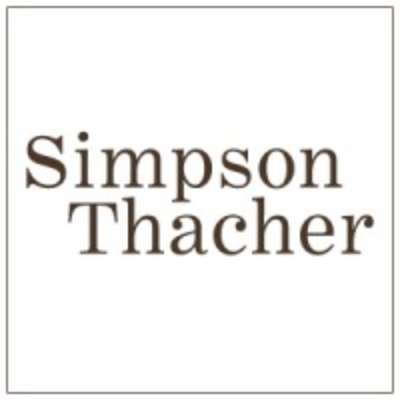 Simpson Thacher & Bartlett is a longtime Wall Street workhorse, housing elite teams in M&A, banking, capital markets and securities law.  The firm is a bit more versatile than many of its peers, however, boasting formidable prowess in private equity, litigation and intellectual property as well.  The London office, in place for three decades, houses more than 40 fee earners, including both US- and UK-trained lawyers.

Founded in 1884 by three Columbia law school graduates, Simpson Thacher & Bartlett LLP has throughout its 125-year history capitalised on financial and industrial trends.  In the late 19th and early 20th centuries, the firm assisted in railroad reorganisations, the creation of mining and natural resource companies, and the expansion of the public utility system.  By the close of World War I, the firm was representing clients in Europe, Asia and South America.

The 1980s and 1990s saw the firm develop one of the world’s premier M&A practices, with a unique strength in private equity leveraged buyouts.  In recent years, Simpson Thacher has represented JPMorgan, Lehman Brothers, Goldman Sachs, Wachovia, UBS and Travelers.  Private equity clients include Kohlberg Kravis Roberts (KKR) and The Blackstone Group, as well as First Reserve, Silver Lake Partners and Hellman & Friedman, among others.

The firm’s London office may be relatively small, with fewer than 50 lawyers, but its practice reflects the firm’s leadership position in the field, having advised on some of Europe’s largest buyouts.  The firm set the record for the biggest buyout in all of Europe with KKR’s £10 billion acquisition with Stefano Pessna of Alliance Boots, and also worked on KKR’s €910 million acquisition of UN Ro-Ro Isletmeleri AS, the transportation and ferry company, believed to be the first private equity buyout in Turkey.  In a recent public-to-private deal, the firm represented KKR in connection with the $2.4 billion acquisition of English company Northgate Information Solutions plc in April 2008.  The firm’s latest deal for KKR was its $1.8 billion acquisition of Oriental Brewery Co in Korea in May 2009—one of the largest LBOs to date in this market by a private equity firm.  Also in May, the firm took a lead role on the £1.7 billion ($2.5 billion) sale of UBS’s Brazilian financial services business to BTG Investments.

In a rare coup that only adds to the London team’s lustre, Simpson Thacher recently raided Clifford Chance for star partner Adam Signy.  The May 2009 hire of Signy, who was CC’s key relationship partner for private equity firm Candover, represents Simpson’s first major corporate hire in London.  It also underscores the firm’s interest in developing UK law capabilities—but only through careful, strategic cherry-picking, rather than large-scale recruitment.

With more than 300 lawyers, Simpson Thacher boasts one of the top litigation departments in the world, handling matters across a broad spectrum of legal disciplines.  For insurer Swiss Re, the firm won a huge victory in a case involving payouts related to the September 11 terrorist attacks.  In 2008, the firm’s litigation practice was recognised in Euromoney’s “Benchmark: America's Leading Litigation Firms and Attorneys” with the publication’s top ranking.  Additionally, “Benchmark” named 11 Simpson Thacher lawyers as “litigation stars”.

Simpson also ranks among the top firms for commercial litigation.  Recently named “Dispute Resolution Firm of the Year” by Chambers and Partners, Simpson Thacher is known around the globe as a go-to firm for corporate problem-solving.  Simpson Thacher helped clients the Hanwha Group and ORIX Corporation achieve a major victory in August 2008 in an arbitration against Korea Deposit Insurance Corporation, an agency of the Korean government.  The dispute involved Hanwha’s acquisition of a majority stake in Korea Life Insurance, which was sold by KDIC in 2001; after a 10-day hearing in Vancouver, Canada, the tribunal issued a unanimous award in Hanwha’s favour.Tender is the cash

Led through the firm’s London office, Simpson Thacher represented NXP Semiconductors in connection with its private debt exchange offers, which reduced NXP’s overall indebtedness by approximately $465 million.  The firm is also representing NXP in connection with a cash tender offer, scheduled to expire in July 2009, undertaken to further reduce the company’s overall indebtedness.

In a matter that draws on lawyers from nearly a dozen different practice areas, Simpson is currently representing pharmaceutical giant Wyeth in connection with its proposed sale to Pfizer in a cash-and-stock transaction valued at approximately $68 billion.  Should the merger go forward, the combined entity will be one of the largest pharmaceutical and health care companies in the world.  Simpson is representing Wyeth before the US Federal Trade Commission and in merger review proceedings in the European Union, China and other jurisdictions around the world.

It’s better in the Bahamas

In 2008, the firm, again led by London, represented KKR in its investment of $250 million in Bharti Infratel through its dedicated Asia fund.  The investment amounted to an approximately 2 per cent stake in the communications tower subsidiary of Bharti Airtel.  The transaction, which represents one of the largest private equity investments in India, was named “Deal of the Year” by the India Business Law Journal.

In April 2009, the firm’s Beijing, London, New York and Washington offices all had a role in the $21 billion financing of Aluminum Corporation of China (Chinalco), as it garnered cash for a $19.5 billion investment in mining giant Rio Tinto.  Chinalco secured the loan from a syndicate of banks led by China Development Bank.  The move represents the largest investment outside the country by a Chinese company.