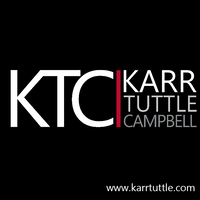 Seattle-based Karr Tuttle Campbell is a full-service firm with strengths including personal injury and employment litigation and labor and employment law. The firm's attorneys, however, handle the full range of legal practice for an even fuller range of clients.

When Starbuck Was Just a Sailor

In 1904, or, as the firm puts it, "when the name 'Starbuck' conjured up Moby-Dick, not coffee," Day Karr and George Gregory set up a partnership in Seattle. More than a century later, the full-service firm maintains a Pacific Northwest focus, serving the greater Seattle area. At almost 60 attorneys, the firm remains relatively small, perhaps because of its goal of "offering a global reach without sacrificing excellence" to the "size and bureaucracy" associated with larger firms. But as Washington State's sole member of the Law Firm Alliance, the firm is tapped into a network of thousands of attorneys across 11 countries.

From Fortune 500 companies to individuals, Karr Tuttle clients come in all shapes and sizes – representing heavy manufacturing, biotechnology, health care, education and banking industries, among others. Big names have dotted the firm's client roster – like Bethlehem Steel, Cingular Wireless, General Motors, Johnson & Johnson, Monsanto, Nintendo and U.S. Sprint. The firm's clients also include quite a few school districts, government entities and numerous insurers. It’s no wonder that throughout the past century, the firm has been ranked nationally numerous times, most recently in 2016 by U.S. News & World Report who ranked the firm on its prestigious “Best Law Firms” list.

Diversity before the Diversity Age

In its early years – long before "diversity" became a buzzword – the firm began hiring women, including 1936 law grad Muriel Mawer. Mawer went on to climb the Karr Tuttle ranks and became one of the first female senior partners in a major Seattle firm. The firm continued its pioneering diversity work in 1989 when it formed a partnership with a Seattle firm consisting of five black attorneys with the intent of grabbing the interest of clients who sought to hire minority attorneys but did not want to sacrifice the resources of working with a larger firm. The partnership caught the attention of the New York Times, which called the innovative move an "unusual alliance." Today, the firm continues its commitment to diversity by providing internships to minority law students through the Puget Sound Area Minority Fellowship Program.