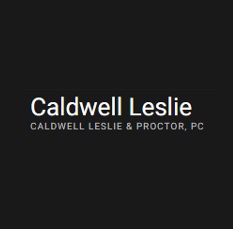 Founded in 1988, Los Angeles litigation boutique Caldwell Leslie & Proctor, PC has made its name representing clients in high stakes litigation. With a dual focus on complex civil litigation and white collar defense, firm clients include Fortune 500 companies, movie and television studios, state and local governments, and plenty of individuals who have found themselves in hot water.

A SLAPP in the Face

Caldwell Leslie also has a history of prevailing on anti-SLAPP motions on behalf of high profile clients, quickly ending lawsuits brought only to censor, intimate, or silence critics by burdening them with the costs of a legal defense. The firm has shut down SLAPP suits on behalf of Netflix, celebrity news outlet TMZ, and the producers and studio behind the television show “The Talk.”

Caldwell Leslie has a history of successfully defending individuals caught in the edges of high profile drug busts. Named partner Michael Proctor, a former deputy federal defender, represented Meili Cady—a struggling Hollywood actress—who acted as the personal assistant to a self-proclaimed Korean heiress who was using chartered flights and flashy luxury cars to smuggle more than 700 pounds of marijuana between Ohio and Southern California. Thanks to a deal made by Proctor, Cady ended up spending just 30 days in prison and a year on house arrest. Caldwell Leslie attorneys also represented celebrated Kiwi chef Antonio Crisci, who was arrested in L.A. on a decades-old indictment stemming from a heroin deal in the World Trade Center in the late 1980s. Although Crisci was facing a mandatory minimum sentence of ten years in prison, Caldwell Leslie attorneys persuaded prosecutors to reduce the charges and the chef was sentenced only to the six weeks’ time he served awaiting sentencing.

One thing that makes Caldwell Leslie stand out is its dedication to a consensus model for making firm decisions. Partners discuss decisions to the point that everyone feels comfortable moving forward, rather than having the normal “majority rules” model that can marginalize some voices. It may seem a bit outdated, but the partnership sees it as a way to eliminate discord.

The firm does not publicize salary information