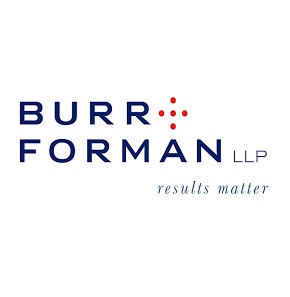 Burr & Forman LLP is a Birmingham based firm with century old roots in the Southeast. Over the past 100 years, this full-service firm has grown to almost 300 attorneys with offices in five states--Alabama, Florida, Georgia, Mississippi, and Tennessee--and nine cities. Burr’s footprint extends beyond its office location. Its attorneys are licensed in 20 states and the District of Columbia, and the firm has representation in all 50 states.

At the turn of the 20th Century, Birmingham, Alabama was earning the nickname “Magic City,” and Walker Percy and Augustus Benners were making some magic of their own. In 1905, the attorneys formed the partnership of Percy and Benners. The two would soon be joined by Borden Burr, in 1909, lending his much needed trial expertise to the firm.

Burr proved to be a formidable trial lawyer, defending the Alabama Power Company against accusations that the company was responsible for malaria in Shelby County. Burr dismantled one of the plaintiff’s star witnesses, finding the experience to be one of his most thrilling in the court room.

Members of the firm continued to speak their mind. In 1949, Benner drafted “The Great Papers,” criticizing print media’s use of paper mills because the mills polluted the Coosa River. Burr & Forman proved to be ahead of its time on other issues as well. During the 1950’s, the firm advised the University of Alabama that the school would not be able to maintain segregation.

Although the name of the firm has changed over the past century, adopting its current moniker in 1986, its commitment to quality legal service has not wavered.

In addition to flexing its muscle in the healthcare, life, health & disability, and ERISA arenas and representing big name healthcare providers like Behavioral Health Systems, Inc., BlueCross BlueShield of Alabama, and CareSouth Health System, Inc., Burr takes pride in the health of its employees as well.

The firm began a wellness initiative in 2008, and has been working hard ever since to encourage its employees to live a healthy lifestyle. The firm boasts a wellness committee that puts together several wellness initiatives each year such as biometric health screenings, online health coaching, smoking cessation programs, and flu shots for employees and their spouses. The firm also offers its employees healthy lunch and snack options as well as access to fitness equipment. Burr’s efforts are not going unnoticed, over 80 percent of the firm’s workforce participates in at least one initiative.