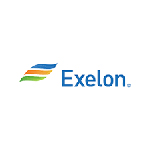 Exelon is lighting up the utility industry with high-powered energy generation and extensive electricity delivery. The utility holding company does enough of both to be designated one of the largest in the US. Its Exelon Generation subsidiary holds power-generating assets of almost 35,000 MW (some 20,000 MW is produced at 23 nuclear plants). Exelon distributes electricity and gas to 10 million customers in Illinois, Maryland, the District of Columbia, Delaware, New Jersey, and Pennsylvania through its regulated utility companies. Its Constellation subsidiary provides energy products and services to 2.2 million business customers. In a major expansion Exelon acquired three regulated utilities for $7.1 billion in 2016

Exelon Generation produces, markets, and physically delivers electricity and natural gas. Electricity accounts for more than 85% of the segment's sales and natural gas generates almost 15%. The division generates energy through a variety of methods including nuclear (20,300 MW), natural gas (200 MW), hydroelectric, wind, solar, and even landfill gas. Its generation capacity is nearly 35,000 MW and it buys more than 5,200 MWs through long-term power purchase agreements.

Exelon's other business division operates several regulated electric & gas utilities including , (9%), Potomac Electric Power (Pepco), (DPL), and (ACE). Each of these utilities purchases, sells, and provisions electricity over its transmission and distribution lines, which in total amount to more than 150,000 circuit miles. Electricity sales accounts for more than 90% of all utilities' revenue.

In addition, the PECO, BGE, and DPL utilities go beyond electricity and purchase, sell, and disburse natural gas to customers.

Exelon Generation has operations in almost all US states and one site in Alberta, Canada. It has a significant nuclear presence in Illinois, Pennsylvania, New Jersey, and Maryland. Its gas and oil power plants are primarily in Pennsylvania, Maryland, Maine, and Texas. Solar and wind investments are found throughout the US. The Exelon Generation division is headquartered in Kennett Square, Pennsylvania.

Exelon's regulated utilities cover a service area of more than 25,000 square miles and provide electricity and gas to customers in major cities such as Chicago, Philadelphia, Baltimore, and Washington D.C. and to US states: Illinois, Pennsylvania, Maryland, New Jersey, and Delaware.

The Mid-Atlantic and Midwest regions of the US bring in about 33% of company revenue, each.

Exelon's Generation division sells its produced power to Exelon's regulated utilities, and to retail purchasers and wholesale markets. Some competition exists in its retail markets, mainly in the Midwest and Mid-Atlantic.

Exelon's regulated utilities are the sole authorized electricity and gas suppliers for their respective service areas. They sell to retail customers, businesses, government agencies, and industrial companies. Although niche projects such as fuel-cell or rooftop solar may present negligible third-party competition from time to time, the regulated nature of its business represents a significant barrier to entry to would-be competitors.

Exelon experienced a steady, rising trend in operating revenue between 2009 and 2016, increasing from $17.3 billion to more than $30 billion. The same cannot be said about its net income, which hit a multi-year peak of $2.7 billion in 2009, a multi-year low of $1.2 billion in 2012, and has in more recent years been positive but sporadic.

In 2016, operating revenue rose 7% to $33.5 billion. Majority of that increase came from the inclusion of the Pepco earnings ($767 million), as well as favorable electric and natural gas distribution rate hikes.

Exelon's net income spiked by more than 200%, from $1.1 billion in 2016 to $3.7 billion in 2017, mostly due to increases in other income, lower depreciation costs, gains from deconsolidation of business, and decreased income taxes.

The regulated utility strategy is one of maintaining and improving its transmission and distribution infrastructure while also expanding geographically via opportunistic acquisitions. In the near term, ComEd, PECO, and BGE will receive improvements in the form of smart meter technology, electricity transmission projects, gas infrastructure, and electric system improvements. The objective is to enhance overall system reliability, improve customer service, and provide a stable positive cash flow that Exelon can reinvest in its utility companies and generation assets. Between 2017 and 2022, Exelon anticipates making $25 billion of capital expenditure (CAPEX) investments across all of its regulated utilities.

A significant strategic achievement for Exelon's utility business was the $7.1 billion purchase of Pepco Holdings, Inc. (PHI) in 2016, which welcomed into the Exelon family three regulated utilities: Potomac Electric Power (Pepco), Delmarva Power & Light (DPL), and Atlantic City Electric (ACE). The acquisition increased its service territory by 50%, expanded its customer base by 20%, and brought an additional annual revenue run rate of $5.0 billion.

Strategy for the generation business focuses on entering long-term agreements to produce predictable earnings. With the power that it produces Exelon Generation engages in considerable commodity price hedging (90% of expected generation is hedged for 2017). When associated regulated utilities (ComEd, BGE, etc.) need more power than it can generate, Exelon Generation enters long-term power acquisition contracts. In November 2017, Exelon announced a new commitment for an additional $250 million of cost savings in this segment to be achieved by 2020.

In October 2018, Exelon acquired Everett LNG facility in Massachusetts. The acquisition secures a source of LNG supply to Exelon’s Mystic Generating Station, the company’s New England operation. The Everett LNG Facility is the longest-operating LNG import facility in the US, with two interstate pipeline systems and a gas distribution system. This follows the company’s March 2018 acquisition of an LNG import terminal from France’s Engie. The Mystic Generating Station is set to retire in 2022.  Also in 2017, Exelon also acquired a 838 MW nuclear generating station located in New York from Entergy Nuclear FitzPatrick for $289 million.