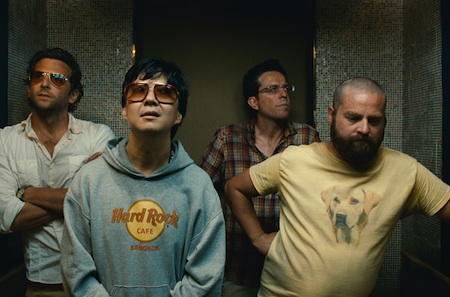 Three years ago, just after the Deutsche Bank-owned Cosmopolitan hotel and casino opened in Las Vegas, I spoke with a Vegas insider about the German bank’s big Sin City bet (you can read part of that conversation in a previous post here). And last week, just after news broke that Germany’s largest bank had put the Cosmopolitan up for sale, I caught up with the same Vegas insider (who’s worked and lived on and around the Strip for nearly 15 years) to ask him, among other things, why the Germans weren’t able to keep the Cosmo in the black. Below is an excerpt from that conversation.

Q. In a recent Bloomberg piece about the Cosmopolitan's closing, Rob Heller, the CEO of Spectrum Gaming Capital LLC, an investment bank in New York, was quoted as saying, “[The Cosmopolitan] is a compelling asset, with great rooms, great location, terrific restaurants and a great reputation among the younger, hipper crowd.” Is this true? Or does Heller not know what the hell he’s talking about?

A. The rooms are nice, and people who haven’t been to the Cosmo like to stay there, or at least see it. As for the Cosmo’s restaurants, they’re considered good, but they’ve lost their luster and are still exorbitantly overpriced; there are just as good, if not better options elsewhere. The Cosmo does have a pseudo reputation for being hip and younger, and has a solid young professional happy hour crowd, but there are just as many goons and so-called regular people now frequenting the Cosmo. Overall, it’s not what it once was, but it has recently opened the newest hot spot, Rose. Rabbit. Lie., which is actually quite cool … at the moment.

A. The tag line was catchy at first, it made for great billboards, but it’s just a tag line. What is wrong with the Cosmo is that it likely loses money because no one goes there for gaming. No one. High rollers and serious gamblers go elsewhere, if not because of the crowd, then because of the gaming set up, which still looks jammed into one long corridor. And though the Cosmo opened a new hot spot, it seems less a place to go clubbing, bar hopping, and gambling than a place just to “see.” It’s not surprising that it fails to make money year in and year out. The current system doesn’t seem sustainable, as the new Drai’s at the Cromwell, Brooklyn Bowl at the Linq, and other places like that begin to open up and take over the new buzz.

Q. According to Bloomberg, "Shopping, restaurants and shows at the Cosmopolitan, including at its three-story Marquee Nightclub & Dayclub, contributed more than twice as much gross revenue last year as its 110,000 square-foot casino." My question is: Does it seem like more people are going to casinos in Las Vegas for all the peripheral stuff (shows, shopping, food) as opposed to the gambling, and so is the future of Vega$ all about the peripheral stuff and not about the blackjack, craps, and roulette anymore?

A. There is a push and significantly more revenue coming from things other than gaming these days, and you see a push for it from some of the major casino resort companies in town. They invest heavily in things like shows, massive clubs, revitalizing outdated bars and hotels, etc. Macau took over Las Vegas in gaming revenue long ago, but gaming is still a big piece of revenue, and the Cosmo doesn’t have it. The Cosmo may start to increase its bottom line by focusing on what it can do: the peripheral to gaming action. The place has always seemed to attract people, just not a whole lot of revenue. I myself still enjoy going there once in a while, as clients like to see it when they come to town—there’s still a draw for it. But I usually recommend staying and gambling elsewhere and visiting only for meals that can be expensed, since it’s so ridiculously expensive.