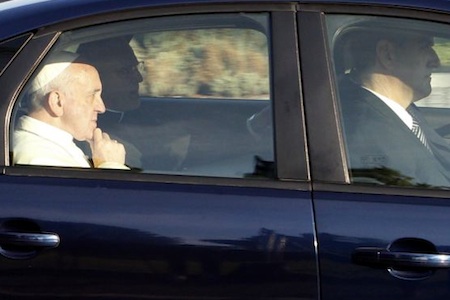 If the Roman Catholic Church were a public company, its share price would have doubled in the past year and its CEO would now be in a strong position to ask the board for a raise.

This is more or less what The Economist implied last week when it published an article called “The Francis Effect,” comparing the Pope to great turnaround CEOs “such as IBM’s Lou Gerstner, Fiat’s Sergio Marchionne, and Apple’s Steve Jobs.” The subhead of the article reads, “About to take over a crisis-ridden company with a demoralised workforce? Turn to a Roman case study.”

Indeed, Francis’ first year atop the RCC has been nothing short of a miracle. Since taking over for Benedict (a less than popular pope with a shady past), Francis has “succeeded in galvanising one of the world’s stodgiest outfits.” He turned around “the world’s oldest multinational” whose “scandals were scaring off customers and demoralising the salesforce” and whose “recruitment was difficult despite the offer of lifetime employment in a tough economy.” In addition, when Francis took over, the RCC’s “finances were a mess,” “leaked documents revealed the Vatican bank as a vortex of corruption and incompetence,” and the firm’s “board was divided and weak.”

How Francis accomplished this turnaround (he now has an impressive 85 percent approval rating in the U.S.) wasn’t by pulling any rabbits out of the papal hat but by merely employing a few well-known management principles, one of which is focusing on your core business. In the RCC’s case, this means serving the poor. And here’s how Francis set the tone for the RCC’s return to its roots:

One of his first decisions was to forsake the papal apartments in favour of a boarding house which he shares with 50 other priests and sundry visitors. He took the name of a saint who is famous for looking after the poor and animals. He washed and kissed the feet of 12 inmates of a juvenile-detention centre. He got rid of the fur-trimmed velvet capes that popes have worn since the Renaissance, swapped Benedict’s red shoes for plain black ones and ignored his fully loaded Mercedes in favour of a battered Ford.

No matter what your core business, aspiring turnaround CEOs take note: being a so-called man of the people (or at least putting on the appearances of being one) can go a long way to ingratiating yourself with your employees and potential customers alike. In other words, there’s no need to flaunt your cash and power in condos, threads, and wheels.

Another management principle Francis has used is “brand repositioning.” And the most prominent example of how Francis has repositioned the RCC brand occurred in the summer of 2013 when he said, “If someone is gay and he searches for the Lord and has good will, who am I to judge?”

Which, according to the New York Times, “could not have been more different from [the views] of Benedict XVI, who in 2005 wrote that homosexuality was ‘a strong tendency ordered toward an intrinsic moral evil,’ and an ‘objective disorder.’ The church document said men with ‘deep-seated homosexual tendencies’ should not become priests.”

Here, any CEO looking to make a PR pivot can follow Francis’ playbook again, and take stock of how behind the times and out of touch with the people his or her predecessor was, and then speak out very publicly against that predecessor’s view, making a hard left turn, if not a complete 180.

A third principle Francis has used is “restructuring.” And to this end he’s brought in a few helping hands to aid him, appointing “a group of eight cardinals (‘the C8’) to review the church’s organisation and [bringing] in McKinsey and KPMG (‘God’s consultants’) to look at the church’s administrative machinery and overhaul the Vatican bank.”

Here, aspiring CEOs should take caution. Although I don’t argue with bringing in the C8 to shake up the RCC a bit, I’m not sure I agree with Francis’ call to bring in so-called God’s consultants. McKinsey, for one, hasn’t quite had a sin-free existence during its lifetime. Exhibit A: Jeff Skilling, former Enron CEO, former McKinsey partner, and convicted felon. Exhibit B: Rajat Gupta, former Goldman Sachs board member, former McKinsey CEO, and convicted felon.

Nor has KPMG lived a life free of sin. Its employees have been involved in tax-shelter scandals and insider trading scandals and accused of being nothing but “used car salesmen” “who like to party.”

Then again, who am I to judge?

Read More:
The pope as a turnaround CEO: The Francis effect (Economist)
On Gay Priests, Pope Francis Asks, ‘Who Am I to Judge?’ (NYT)
A Day in the Life of the Pope (Vault)

A Day in the Life of the Pope
Filed Under: Finance|Workplace Issues