History of the Male-Female Salary Gap: A 95-Year-Old Problem 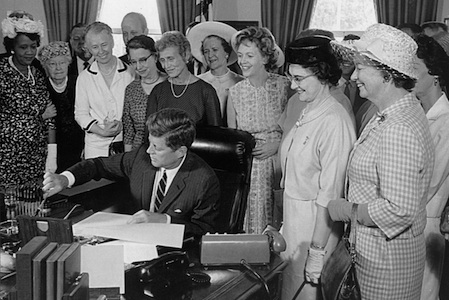 Last year, the Equal Pay Act signed by John F. Kennedy turned 50 years old. The Act was designed to create a society where women were as valued as men in the workforce and to remove barriers that caused discrimination. Because of that Act, when discussing equality in the workplace, 1963 is widely considered the beginning of establishing a fair playing field for women in the workforce. However, the problem was not a new one in the early ‘60s.

In 1920, a similar act—which served as the foundation of the Equal Rights Amendment we have today—was introduced in Congress but never ratified. The reason for the act’s failure was disagreement among debating parties, including women’s equality groups, as to whether the act would actually help narrow the gender pay gap. This left JFK, four decades later, to present a new approach.

Kennedy, who in 1961 had proclaimed that “women have brought into public affairs great sensitivity to human need and opposition to selfish and corrupt purposes,” helped create a taskforce that included Eleanor Roosevelt as its chair; the taskforce was given less than two years to develop “recommendations for overcoming discrimination in government and private employment on the basis of sex.”

Ultimately, the report recommended, among other things, paid maternity leave for women workers, an end to gender discrimination in hiring practices, equal pay for women, and universal child care. It also called on the Supreme Court to recognize women as men’s equals under the Fourteenth Amendment.

Two years and two acts later, gender discrimination was set into law to try and close the pay gap between men and women in the workplace.

Fast-forward to today. Have we made any progress in the past five decades?

The gap actually narrowed significantly in the 1980s, when women gained the education and experience needed to apply for (and get) the same jobs as men. But since the early 1990s, closing the wage gap has slowed, with women today earning about 80 cents to every dollar a man makes.

In fact, a recent report from the U.S. Bureau of Statistics on the Gender Wage Equality shows that, for the first quarter of 2014, women made an average of 82.6 percent that men made each week, which was better than the 79.7 percent recorded in 2004. So, although the gap still exists, it is shrinking, albeit slowly.

As for the reasons behind why the gap exists, for years “workforce attachment”—defined as how long women stay in the workforce due to family commitments—has been cited as the main factor. Eleanor Roosevelt raised the issue in the 1960s and so did the early gender wage pioneers in 1920. It has been commonly accepted that women are usually the ones to give up a career to start a family and, if any family crisis arises, are the ones to stay at home and tend to that crisis. This can be seen as a disadvantage in high-powered management roles, or in roles where the expertise is solely dependent on one employee.

According to Francine Blau, who teaches labor economics at Cornell University and is something of an expert on the gender pay gap, a good portion of the gap is directly a result of women leaving the workforce to raise families. She has said that “the need to balance work and family”—who stays home with sick children, how much the needs of family life prevent women from being able to work, etc.—“may be the cutting-edge problem facing women in the labor market today.”

And although discrimination has lessened over the years and contributed to a narrowing of the gender pay gap, discrimination still exists. “Rather than being overt and conscious, [discrimination] may be more covert and subtle, and even unconscious,” Blau has said.

She has also noted that differences in the occupations and industries in which men and women pursue and join contribute to the wage gap. “For example, the STEM (science, technology, engineering, and math) fields are high paying, and women are underrepresented.”

There is also the possibility that part of the reason for the narrowing of the gap might not have to do with women at all.

According to the US Bureau of Statistics, women’s earnings have remained almost constant in the last decade, while men’s wages appear to be declining. In fact, both men’s and women’s median earnings were down last quarter.

And so, while we can be pleased that the gender wage equality gap is narrower than it was a decade ago, the possibility that this narrowing could be partially related to the weekly wage for men being in decline is not something to get excited about.

Still, if we are to truly close the wage pay gap between women and men, we need to carry on addressing the specific needs of women in the workplace and continue to encourage women to pursue high paying careers. At the same time, we also need to shed a lot more light on the pay gap.

Richard Cohen, a New York-based attorney who specializes in labor law, has noted that women are sometimes unaware of the Equal Pay Act, and employers don’t do much, if anything, to make them more aware. “A lot of companies don’t disclose wages,” he has said, “and they discourage people from trying to find out what everyone makes. When women do realize, they keep quiet. Sometimes something else makes them angry—like sexual harassment—and then the wage gap gets mentioned in a lawsuit.”

Blau agrees that “there could be more awareness about the wage gap—sometimes when we focus on the progress, which is hopeful to younger women, we lose fact that there are still obstacles. Yes, we have made enormous gains on one hand, but we are still falling short of the 100 percent.”

Indeed, and although the causes of the pay gap aren’t always clear, it is clear that we need to continue what JFK, Eleanor Roosevelt, and others have started—and search for ways to bridge the final 20-cent gap.

Read More:
In Tepid Wage Growth, a Potent Sign of a Still-Fragile Economy (NYT)
Is the Male-Female Earnings Gap Here to Stay? (Vault) 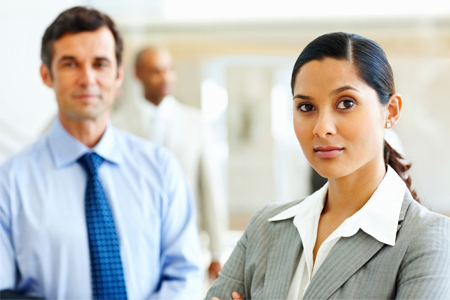 Is the Male-Female Earnings Gap Here to Stay?
Filed Under: Workplace Issues