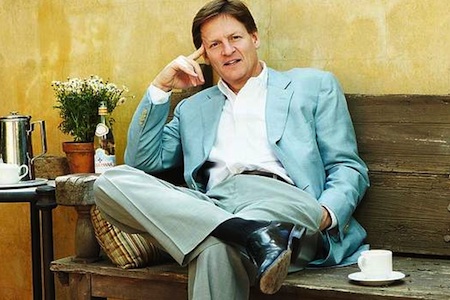 For a long time, Wall Street knew this day was coming. And now, Michael Lewis and Main Street know it, too.

In the very near future, no longer will the sharpest blue-blooded, type A, squash-playing, financially-driven Ivy League graduate with excellent complexion rule the trading desks of Wall Street’s largest and most-storied institutions. Instead, it will be the most creative and innovative IT guy (or gal) who’ll be calling all the shots.

And here’s Michael Lewis, speaking on Bloomberg TV, in one of his many television spots promoting Flash Boys, his book about "a small group of Wall Street guys who figure out that the U.S. stock market has been rigged for the benefit of insiders [and] who band together and set out to reform the financial markets by creating an exchange in which high-frequency trading will have no advantage whatsoever," explaining why:

The broad picture is Wall Street has become increasingly about technology. The technology and technologists are sometimes displacing traders. The technology, the computer, is replacing human traders. And so the people who program the computer, their status has gone through the roof … and what appears to me to be the situation is the big banks have a hard time getting their mind around the technologists, the IT guys, being of the same stature as the traders. And there’s a kind of collision, they don’t speak the same language, they don’t interact well.

In addition to Wall Street’s inability to communicate with technologists and get their minds around the fact that IT guys and girls should be treated equally to if not better than traders, Wall Street has another problem: Instead of opting for careers in banking, the world’s most talented young technologists have been joining the world’s most respected tech firms, including Google, Amazon, Facebook, and Twitter. Which means that much of Wall Street’s future relies on competing with the world's top tech firms for talent.

And although, at a glance, it might seem difficult to impossible for banks like Morgan Stanley and Goldman Sachs to compete for talent with the much sexier Googles and Facebooks of the world, it can be done. And it starts with creating clearer lines of communication.

Here’s Brad Katsuyama—a former Royal Bank of Canada banker, the current CEO of IEX Trading Group, and, most famously, the hero of Flash Boys—speaking in the same Bloomberg TV spot about the gap between IT employees and Wall Street:

There’s a big divide. Technologists want to understand how the business [Wall Street] works. But the business might not always be incentivized to let them know. The business wants to understand technology. And I think that what you try to do is marry the two … I think, really, technologists want purpose. They want to serve a greater good. And I think if you put them in a box and say, Just make this box faster, it’s hard to serve that purpose.

Indeed, and what top IT talent want in a job today is much different than what top finance talent has wanted for decades. Top technologists don’t just want to make millions of dollars (though they want that, too), they also want their work to have meaning and purpose. They want to create applications and solutions that not just thousands of people use and benefit from, but hundreds of millions of people use and benefit from. They want to be part of the global conversation (which doesn’t involve lawsuits and misdeeds). They want to know that their work is for the greater good (not simply for the good of shareholders and the C-suite).

This talent shift is certainly no small problem for Wall Street. And although the world’s largest investment banks still have a long way to go before they understand how to work successfully within this shift, they do understand that those quickest to do so will be the clear front-runners on the Street.

Is Silicon Valley Just as Decadent as Washington and Wall Street?
Filed Under: Finance|Technology|Workplace Issues