Save
Marc Dreier?s still-puzzling arrest in Toronto last week on a charge of fraudulent impersonation has reportedly already set in motion an exodus of attorneys from Dreier?s eponymous firm as fear of impending dissolution spreads. That much we know?or, rather, believe David Lat knows. One of the unknowns, however, is how the collapse of Dreier LLP will affect the Dreier empire?s various subsidiaries, side-projects and related entities. (Recipe for implosion: Get managing partner arrested. Inspire rumors that millions are missing from firm escrow accounts. Allow employees to believe that firm mightn?t make next payroll. Shake confidence vigorously, let sit until completely dissolved. Feeds 10 to 12 employment lawyers.)

For starters, there?s Pitta & Dreier LLP and Pitta, Bishop, Del Giorno & Dreier LLP?subsidiaries of Dreier LLP that specialize in labor law and government relations (read: lobbying), respectively. As fully contained subgroups under Dreier LLP, we?re guessing that they?re toast if the parent firm does, indeed, go the way of Heller and Thelen. The fate of a pair of L.A. Basin companies?74-attorney entertainment lit and corporate transactions specialist Dreier Stein Kahan Browne Woods George LLP and sports marketing and consulting firm Dreier Sports Opportunities Group LLC?in such a scenario appears less certain. In neither case, however, does the future look rosy: For one, there?s a lack of foundation?a merger between two Southland powers birthed Dreier Stein less than a year ago, and Dreier Sports only came into existence in May. Of equal importance is the apparent influence and involvement of The Man himself in the operations of both firms: Dreier Stein?s billing as ?the antithesis of the modern lawyer factory? is essentially a recycling of Dreier LLP?s selling point as ?a more responsive and innovative alternative to conventional ?large-firm? lawyering,? and a May press release touts Dreier Sports as a ?complement? to Dreier LLP?s sports law practice. Neither of these definitions inspires confidence that either operation can remain standing independent of Dreier?s guidance?and, more crucially at the moment, financial support.

UPDATE: Dreier indicted for fraud in U.S. federal court! Authorities reportedly waiting for him on the tarmac as he returned from Canada! Or inside the terminal, as the case may be. We?re not really sure which. Either way, AmLaw reports that Dreier?s slated to appear in a Manhattan court this very afternoon. Oh, and he?s also the target of lawsuits filed in the last 24 hours by the SEC and Wachovia, the latter of which claims that Dreier LLP owes close to $13 million in overdue loans.

UPDATE DEUX: As the day has progressed and public knowledge of the extent of Dreier?s alleged misdeeds has grown exponentially, our hope for the survival of Dreier LLP has decreased inversely?from an optimistic ?some? to a fading ?sliver? to, we can safely say at this point, approximately ?none.? If the allegations prove true, Dreier?s arrest in Toronto came as he was attempting to sell a hedge fund $44 million in phony promissory notes after recently bilking two American funds out of some $113 million in similar scams. Reportedly, scores of Dreier attorneys have already fled, including much of the firm?s bankruptcy practice, while others are finalizing escape routes.

Phew. What a Monday. 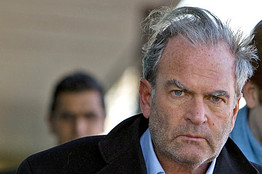