Court is Back in Session: Law School Advice from the Pros 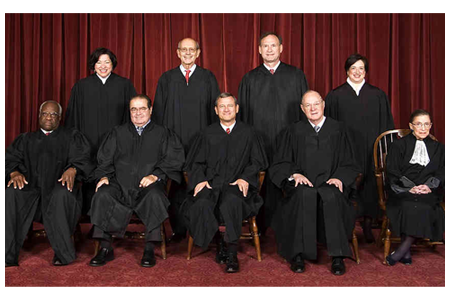 The first Monday in October proceeded as usual this year, at least for the U.S. Supreme Court. In spite of the partial federal government shutdown, the court began its new term on Monday, October 7, and has announced that it will operate normally at least through October 18 (further announcement will be provided if the lapse of appropriations continues beyond that date). Issues the court will wrestle with this term include abortion, religious freedom, affirmative action, the presidential recess appointment power, and campaign finance—not a bad lineup to follow the excitement of last year’s monumental rulings on gay marriage and the Affordable Care Act.

Attorneys, law professors, and law students alike will be following the Supreme Court closely as this term unfolds, and along with fascination over the court’s incredible power to shape American policy and politics comes fascination with the nine individuals who occupy its leather-bound chairs. Justice Ruth Bader Ginsburg is the subject of a recent Washington Post Magazine article which discusses, among other things, her love for opera, the death of her late husband Marty, and her belief that the next president will be a Democrat (and that therefore, she should be in no rush to retire). The latest issue of New York Magazine contains an extensive interview with Justice Antonin Scalia covering topics ranging from his radio and TV preferences to his belief in the Devil. Summary: he listens to Bill Bennett and sometimes even NPR; he’s never heard of Homeland but he loves Seinfeld and the Soup Nazi; he thinks the Devil has become “wilier” over the years. And today, the Wall Street Journal reports on a talk Justice Anthony Kennedy gave at the University of California Washington Center this week, which covered important topics such as gay marriage, the confirmation process for federal judges, and Lady Gaga.

For law students immersed in midterm exams or clinics while simultaneously juggling journal responsibilities, clerkship applications, and a job search, the hubbub surrounding the Supreme Court and media profiles of the justices may either be far-off whispers or welcome distractions. Regardless, it’s hard to accept that the justices are mere mortals who themselves slogged through 1L exams and anxiously anticipated getting called on in Civ Pro. OK, so the exams were a breeze for them and they always knew the answer because they are freak geniuses—but still, the justices were law students once, and they have been known to offer valuable advice to those currently coming up through the ranks. Here are some nuggets of wisdom straight from the bench:

Sonia Sotomayor: 1) Find your passion; 2) Go to the movies.

At a visit to UChicago Law in January 2011, Justice Sotomayor told students to spend time with their peers outside the classroom and search for their passions. She warned law students that an overly-packed schedule leads to burnout. “Do you stop and breathe?” Sotomayor asked the audience. “Do you stop and talk for the sake of talking? Do you even see a movie?” Sotomayor noted that when selecting clerkship candidates, she frequently passes over resumes that cram in dozens of activities over those that demonstrate passion and commitment to specific issues or causes. More recently, Sotomayor told students at Penn Law in April 2012 that she wishes she had clerked after law school because “it is the best way to learn the law." She stated, "You can learn more in one year of clerking than you learn in eight years of practicing at a firm."

In a 2007 speech at Northwestern Law, Chief Justice Roberts told students and faculty that he wished law schools would spend more time teaching students how to apply their knowledge.  He lamented, "I don't think [law students] spend a great deal of time with what somebody like a Cicero might refer to as rhetoric, or the idea of taking their understanding of ideas and being able to communicate them in a particular way." Advocacy and negotiation skills, he added, are "such a big part of what lawyers do no matter where you go." In an NPR interview in 2011, Roberts recalled an instructive tale from his time clerking for then-Justice William Rehnquist. He handed Rehnquist a draft opinion, which Rehnquist later handed back with a majority of the text crossed out. Rehnquist advised Roberts to insert that text into footnotes. "So I went back and gave him a draft with all that stuff in footnotes," Roberts recalled, at which point Rehnquist "looked at it and said, ‘Fine, now cut out all the footnotes.’” Lesson: It’s always possible to further cut down your brief/opinion/memo.

Sandra Day O’Connor (retired, but she’s still got it!): 1) Be a sponge; 2) Jump at every opportunity.

"Learn everything you can," O'Connor said at a visit to Colorado Law last month. "Be a good student. Do your homework. Learn to write. Learn to express yourself well. Learn everything they have available to teach you." It may seem simple, but the stress and competition of law school can easily make students forgot why they spent $150,000+ to be there in the first place.

Ruth Bader Ginsburg: 1) Get outside your own head; 2) Spend time with family.

At a visit to Berkeley Law this past September, Justice Ginsburg told law students, “If you survive three years of law school, you have a talent and skill that is precious, but if you use it for only personal gain—you won’t get long-term satisfaction. Do something outside of yourself that will help make things better for others not as fortunate as you.” She also spoke about starting Harvard Law when her daughter was just 14 months old, and finding that time with her family was a needed break from her studies: “I didn’t take it as seriously as some classmates who forgot there was a life beyond law school.”

Antonin Scalia: 1) Electives are for hippies; 2) Move to Cleveland.

As is often the case with Justice Scalia, he drew widespread media attention when he told students at the University of Wyoming’s College of Law in October 2012 not to waste their time taking “frill courses.”  He stated, “The only time you’re going to have an opportunity to study a whole area of the law systematically is in law school.” Law students “should not waste that opportunity,” Scalia said. “Take the bread and butter courses. Do not take, ‘law and women,’ do not take ‘law and poverty,’ do not take ‘law and anything.’” (Ouch!) Prior to that appearance, in February 2012 Scalia had spoken at UChicago Law and delivered the same message. He also told students to find a work-life balance. “Try to find a practice that enables you to maintain a human existence … time for your family, your church or synagogue, community … boy scouts, little league.” Scalia noted that his first job was at Jones Day in Cleveland, which allowed him to find such a balance. “You should look for a place like that. I’m sure they’re still out there. Maybe you have to go to Cleveland.”

So why not start following some of this advice this weekend? Take tonight off from studying, go see the Tom Hanks Somali pirate movie, and tomorrow morning, take a look at some Ohio job listings.

Back to School: Tips for 1L Success
Is a Federal Court Clerkship Right for You?
The question facing Ruth Bader Ginsburg: Stay or go?
In Conversation: Antonin Scalia

Back to School—Tips for 1L Success

Is a Federal Court Clerkship Right for You?
Filed Under: Law