The One Thing Cruz, Rubio, Clinton, and Sanders Agree On: Wall Street Stinks 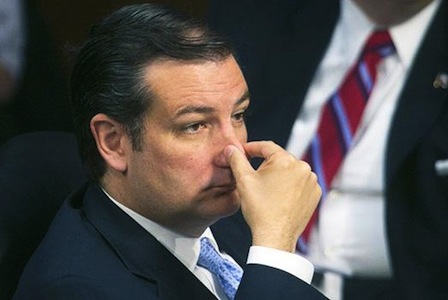 In the Republican Party, where financial firms typically can count on a friend, Sen. Marco Rubio has said big banks have been “bragging” that they are too big to fail and that he would repeal the law that grants that status. Ohio Gov. John Kasich has said Wall Street needs “a good ethics lesson ... on a regular basis.” Sen. Ted Cruz [whose wife works for Goldman Sachs] has said he wouldn’t bail out “rich Wall Street banks.” Even former Florida Gov. Jeb Bush, who worked at Lehman Brothers and Barclays PLC, has said banks should be required to hold even more capital.

So, what's an investment banker or trader to do? Whom do you support? In the past it was easy. To the right was where you typically threw your money. The right was the party of fewer financial regulations, lower taxes. However …

… this election is unusual: Candidates on both sides are playing to widely held public ire over banks’ role in the financial crisis and their subsequent taxpayer-funded bailouts. Critics in many corners have accused banks of failing to learn the lessons of the crisis and for enriching themselves—or becoming bigger—at the expense of working people.

In Wall Street's defense, a lot of this bashing is nothing but rhetoric, "appealing to voters’ distrust of the financial sector." The truth is, in general, banks are better capitalized now than before the crisis. They're smaller not larger. And the Dodd-Frank act is minimizing Wall Street risk taking (and some bankers even believe Dodd-Frank would be "impractical to repeal").

But the unanimous bashfest isn't something Wall Street should take lightly or brush off. It signals that the public image of banking still has a long way to go until it's restored to its pre-crisis shine. Which means that recruiting on the Street is going to continue to be a challenge in the coming years. Which means that Wall Street firms (banks, hedge funds, etc.) need to continue to work to get the message out that they've changed their ways (if, in fact, they have changed) since the crisis.

Today, the competition for top talent is fiercer than ever. Financial firms are no longer simply competing with each other but also with tech firms and startups (in tech and other growth industries such as health care). And image is, if not everything, extremely meaningful to candidates. Jobseekers want to take pride in where they work and in the work they do. Am I working for a company that's respected? Am I doing work that's respected? Will this position and my work be looked at favorably by my future educators and employers? Young, talented Americans are constantly asking themselves these and other questions like them.

In any event, look for the final Republican debate on Thursday night to contain a whole lot more Wall Street bashing, since this debate will focus on economic issues. And as you take in the Trumping and Cruzing and Bushing, one of the most powerful bankers in the world has some advice for you:

The candidates’ comments [about Wall Street] prompted J.P. Morgan Chairman and CEO James Dimon to compare some aspects of the Republican debates to reality television. In November, Mr. Dimon, who has identified as a Democrat, told the bank’s analysts and others that people should eat popcorn and grab a beer when watching Republican debates because they can be more entertaining than informative ...

Indeed, the debates, while not as captivating as, say, NetFlix's "Making of a Murderer" (which, among other things, sheds light on what several days in the life of two top-notch defense attorneys look like) rank among the most entertaining hours of television I've seen in years.