While most employees at most big banks are still unable to access most social media sites from their work computers, a select group of 600 Morgan Stanley Smith Barney financial advisers have been given the go-ahead to start using LinkedIn, on a limited basis, as well as to start using Twitter beginning in June. 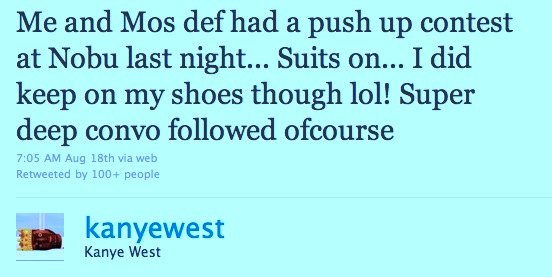 However, Morgan Stanley brokers will not be able to tweet about anything they wish (such as what they think about fur pillows or with whom they engaged in super deep convo the night before after a handful of sake bombs). Instead, their tweets will be closely monitored internally, and only those messages approved in advance by Morgan Stanley compliance reps will be allowed to be published.

After the initial six-month test period, Morgan Stanley (which was one of the lead underwriters of LinkedIn's well-received IPO) has plans to allow all of its brokers to speak to clients and would-be clients via 140-character blasts.

This embracing of social media by Morgan Stanley (as well as by a few other brokerage firms, including Bank of America Merrill Lynch, Wells Fargo Advisors, and UBS Wealth Management, all of which haven't yet given their advisers the green light to tweet but have allowed them to use some facets of social media sites) is expected to enable the "graying ranks of advisers to communicate with and attract a new generation of clients and prospects."