Goldman Hires "All-Star Lobbying Team" to Fight For Its Righ

As regulators begin to interpret the Volcker Rule, deciding on how to govern (and how much to limit) banks' abilities to trade their own money, Goldman Sachs has hired a bunch of big-swinging D.C. lobbyists to fight for its right to trade*. After all, Goldman, more than any other Wall Street firm, will suffer if the Volcker Rule is stiff: it's estimated that Goldman stands to lose up to $3.7 billion in annual revenues. 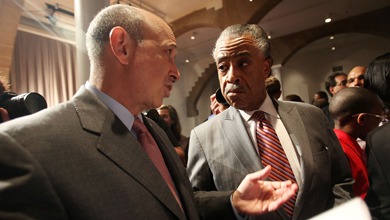 Which is why "they're totally freaked out about Volcker," said a Goldman lobbyist who declined to speak on the record for fear of losing the contract. "People are working on that a lot, with agency staff, with lawmakers, you name it."

"Before the crisis, Goldman was basically non-existent in Washington," said a former Congressional staffer who now works as a policy analyst at a Wall Street bank. "Post-crisis, Goldman is everywhere."

In order to be everywhere, fighting for its rights, Goldman has enlisted lawmakers on both sides of the aisle, hiring Republicans Trent Lott and John Breaux as well as former Democratic House Majority Leader Dick Gephardt. Other "all-star heavyweights" include the former deputy staff director for the U.S. House Financial Services Committee (who heads Goldman's internal lobbying group) as well as "former staffers from the U.S. Senate Banking Committee, the White House, and regulatory agencies."

*In case you haven't seen the Beastie Boys' celebrity-filled remake of the original video for the trio's 1986 anthem "(You Gotta) Fight For Your Right (To Party)," now's your chance. Kick it here.