Mark Zuckerberg, who, after Facebook's highly-anticipated IPO, will be as rich as God, has apparently gone biblical, vowing to only eat meat from animals he has killed with his own hands. 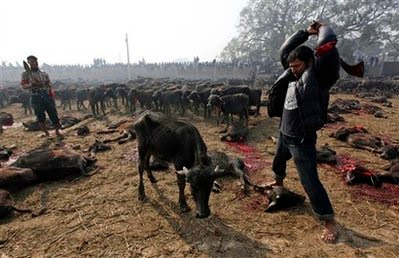 So far, the Facebook CEO has slaughtered a lobster, chicken, pig, and goat (as for the goat, Zuckerberg killed it by slicing its throat, which is, of course, "the most kind way to do it," according to his pal Jesse Cool, a Silicon Valley chef).

Although Zuckerberg's vow to only digest what he can kill might sound strange and/or a bit out there, it's pretty standard fare for the social media mogul. Last year, he vowed to learn Chinese, and in 2009, he promised to wear a tie every day.

Sure, murdering fowl and crustaceans could be seen as being slightly more intense than studying Mandarin or sporting silk Armani, but Zuckerberg says it's not that dissimilar:

"Every year in recent memory, I've taken on a personal challenge -- something to learn about the world, expand my interests and teach myself greater discipline ... This year, my personal challenge is around being thankful for the food I have to eat. I think many people forget that a living being has to die for you to eat meat, so my goal revolves around not letting myself forget that and being thankful for what I have. This year I've basically become a vegetarian since the only meat I'm eating is from animals I've killed myself. So far, this has been a good experience."

I don't know about you, but I'm hanging on the edge of my meat hook in anticipation of Zuckerberg's next Facebook post about his next kill.

In other news, for the balance of 2011, Goldman Sachs CEO Lloyd Blankfein has vowed to only eat animals that he has petted, and JPMorgan Chase CEO Jamie Dimon has promised to survive solely on the stripers and bass he hooks in the East River.

(CNNMoney: Mark Zuckerberg's New Challenge: Eating Only What He Kills)

50 Best Investment Banks to Work for in 2020
Filed Under: Finance|Technology