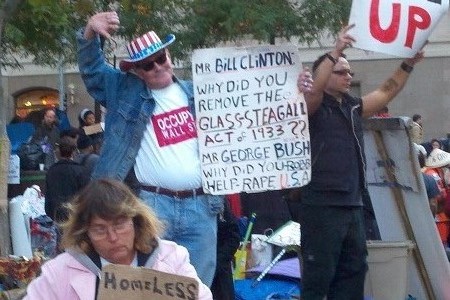 “Earlier last week, I was walking around Zuccotti Park and I was taken aback by what was going on around me. One girl proudly displayed her amazing hula hoop demonstration to the beat of drummers. Another ‘protestor’ held up a sarcastic sign saying, ‘Adopt a protestor.’ Still others were selling various wares. The remaining occupiers were either holed up in tents or out sharing their views through clever signs as onlookers took pictures with delight at their new tourist attraction. What has happened to Occupy Wall Street; a movement that was supposed to make a difference?”

These were my words from a blog I wrote on November 1, 2011, more than two months into the Occupy Wall Street movement that captivated media attention all over the world only to fizzle out once the camp created for protest became the home to wanted criminals, drug dealers and those looking for a free meal. When Mayor Bloomberg ordered the park cleaned up, Occupy Wall Street seemed to become a distant memory…or did it just become something else?

With Occupy Wall Street celebrating its 5-year anniversary this past weekend, it’s important to look at the dramatic impact the movement has continued to make several years after its inception.

Economic Inequality
The fiscal crisis of 2008 brought attention to the problems with the nation—and the world’s—economy. The rich were getting richer; the poor were getting poorer and the middle class was all but disappearing. As the economy continued to worsen and those believed to be the cause of the problem continuing to make money, pent-up frustrations gave rise to the Occupy Wall Street Movement in 2011.

“We are the 99%” was the war cry against the 1% of the population that held all of the wealth and didn’t seem to care for the needs of the vast majority. Now, five years later, the economy is in far better shape than it was in 2008…yet, it is the driving force in the current presidential election. Who will bring jobs back to America? Which candidate is in the pocket of the wealthy class? Who better represents the views of the 99%? Even the Koch brothers couldn’t buy this election as voters look to take a stand with their vote and rebuild an economy that many had thought was already rebuilt.

Millennial Uprising
The millennial generation graduated college with dismal prospects for jobs during the worst economic collapse since the Great Depression. Feeling like they were paying for the mistakes of previous generations, millennials turned to Facebook, Twitter and Tumblr to voice their frustration. Social media became popular during Generation X, but it was millennials that truly took to the medium as a way to communicate and Occupy Wall Street may be considered one of the first movements geared by social media.

Twitter, which gained notoriety for bringing attention to the civil unrest in the Middle East, became the focal point of American unrest as thousands were encouraged to descend onto lower Manhattan and take part in a non-violent protest against the big financial institutions blamed for the economic disparity felt across the country. Occupy Wall Street demonstrated the ability of millennials to quickly mobilize behind a cause. Millennials have continued to be heard ever since, from changing the work landscape to gathering support for an unlikely presidential candidate.

The Progressive Movement
Socialism had long been viewed as a bad word. It evoked images of communist nations and the Cold War. Socialist countries stood in the way of the capitalism that built America into a world Superpower. But capitalism failed the 99% during the fiscal crisis and social media brought attention to countries that embraced free college tuition and universal healthcare. Suddenly, socialism was no longer a bad word—it was a vehicle for change. But it needed a new name that could be spoon-fed to the masses, so the progressive movement was born.

In New York City, Mayor Bill de Blasio rose from obscurity, fighting for the little people that were burdened by yet another hospital closing. He had “weird” views about free pre-k and afterschool programs; he discussed minimum wage hikes that had never been done before, and paid sick leave. De Blasio became a voice of the voiceless and the best choice to lead the City after the previous mayor kicked out protestors from Zuccotti Park. De Blasio even supported the right to protest during the start of the #BlackLivesMatter movement.

And then there was Bernie Sanders, the anti-candidate who would have been a third party choice in previous elections, but was suddenly thrust into the spotlight as a potential Democratic candidate who could lead our nation. His views on free college tuition and universal healthcare attracted the attention of millennials who had long viewed this as a viable possibility—especially on social media—but never thought it could actually happen. Lacking media attention, Bernie Sanders created a grassroots initiative on social media that led to Occupy Wall Street-like rallies in his support. Here was a candidate who understood the frustration behind Occupy Wall Street and would fight for the 99% when other candidates were viewed as beholden to the views of the 1%. Even Donald Trump’s success can be viewed as the dark aftermath of the Occupy Wall Street movement with disenfranchised voters demanding change by any means necessary.

The Fight for $15
The Fight for $15 is a continuation in the fight against income inequality. Tired of low-wage employers making billions of dollars in profit while employees struggled to make ends meet, fast food workers in New York decided to strike. If the protests by these workers looked familiar, you can thank former Occupy organizers who helped in the ‘Fight for $15’ movement that took center stage in New York City politics and eventually the national stage, when Bernie Sanders insinuated that Hillary Clinton didn’t support a raise in minimum wage to $15 an hour. It was one of the cornerstones of his campaign. Today, the ‘Fight for $15’ is an international movement in over 300 cities on six continents of fast-food workers, home health aides, child care teachers, airport workers, adjunct professors, retail employees—and underpaid workers everywhere. And their voices have been heard. The movement has claimed responsibility for $15 an hour across New York State, California and Seattle and huge raises in cities from Portland to Chicago. They even won $15 for Pennsylvania nursing home workers and all hospital employees at UPMC – Pennsylvania’s largest private employer. And the movement continues.

The Fight Against Oppression
Much was said about the lack of direction behind Occupy Wall Street. If you asked protestors what they were fighting for, you’d get very different answers—income inequality, the end of racial oppression, a fight against fracking, etc. And while the movement did seem to lack direction, it splintered off into several directions with real purpose. These social media-based movements led to rallies in support of gay marriage; the rise in minimum wage; and the end of stop-and-frisk, a common police practice many felt unfairly targeted minorities in New York City. The #BlackLivesMatter movement has firm roots in the Occupy Wall Street protests with similar marches through New York City to fight against the disproportionate number of police-related shootings involving black individuals.

While Occupy Wall Street was criticized for its lack of real leadership, the movement led to opportunities for new leaders to emerge and have their voices heard. Occupy Wall Street proved that people have a right to speak up. And when I saw signs up for so many different causes, leading me to believe Occupy Wall Street was failing in its mission, it turned out to be a vehicle for others to embrace different missions of their own. The most recent example may be San Francisco 49ers quarterback Colin Kaepernick, whose simple act of defiance in not rising for the National Anthem led to a real conversation about race relations in America and similar acts of protest in football games, soccer matches and high school and college sporting events across the entire country.

Occupy Wall Street provided people “permission” to speak five years ago. Today, those voices have grown in size and strength and are louder than ever before.

Are Protestors Standing Up For Something or Standing Still?